CNZD (Centre for Missing and Exploited Children) is helping over 350 people who have fled Ukraine to Croatia. In a short space of time, this trial member group of the Emmaus Movement has opened a centre for children traumatised by the conflict, and an information centre for refugees.

The Children’s Corner – a safe space to rest and integrate

CNZD specialises in supporting child and teenage victims of trauma, and right from the start of the conflict in Ukraine the organisation opened a Children’s Corner (children’s centre), and is hoping to be able to open two others in the near future. The facility is managed by a teacher, psychologist and an interpreter, and enables 15 children, who are traumatised by the war, to be given support every day (70 children have registered to date). The centre’s aim is to provide counselling for these children, and lay the foundations enabling them to integrate into Croatian society and the local education system.

Accompanied by their parents, the children spend a few hours a day at the centre, and can have a rest, enjoy a hot meal, and speak to the association’s psychologist. They can also follow online lessons in Ukrainian. The parents remain at the centre while their children are being supported by the team in order not to reproduce separation trauma. A few weeks on, progress is already being made, and the children no longer feel the need to return to their parents as often as before.

This centre is unique in Croatia and is managed by CNZD. It offers refugees all the information needed to integrate: asylum applications, entering the labour market, registering for Croatian language lessons, administrative formalities advice, applying for benefits and to join the health insurance scheme… In the space of three weeks, close to 400 people have passed through the centre, which is managed by a lawyer and an interpreter employed full time by CNZD. Open from Monday to Friday, the centre also relies on volunteers, who work shifts to provide this service for refugees. Many regions in Croatia are drawing inspiration from the model created by CNZD and are opening similar centres.

A couple and their five children arrived at Osijek in the first days of the conflict. The parents speak fluent Croat because they lived in Bosnia-Herzegovina for many years, and have been hired by CNZD as interpreters. The team has nicknamed them the “stars of CNZD” because of the many media interviews they have done.

Croatia has taken in over 13,000 people from Ukraine, and some 300-500 people arrive every day. Close to 95% of them are women and children. Housed in hotels, youth hostels or flats, they are given three meals a day and the toiletries that they need.

Ukraine and Croatia have strong links because of their shared history (Ukraine was one of the first countries to recognise Croatian independence in 1991) and their very similar languages. Croatia was at war from 1991-1995, and consequently has recent experience of armed conflict and the resulting traumas. The siege of Mariupol is a painful reminder of the 87-day siege of Vukovar in 1991. The city was razed to the ground by bombing. The Croatian people’s reaction is living up to the close links between the countries: everything possible is being done to help Ukrainians enter the labour market and access education, and each person needs to feel safe and welcome in Croatia. 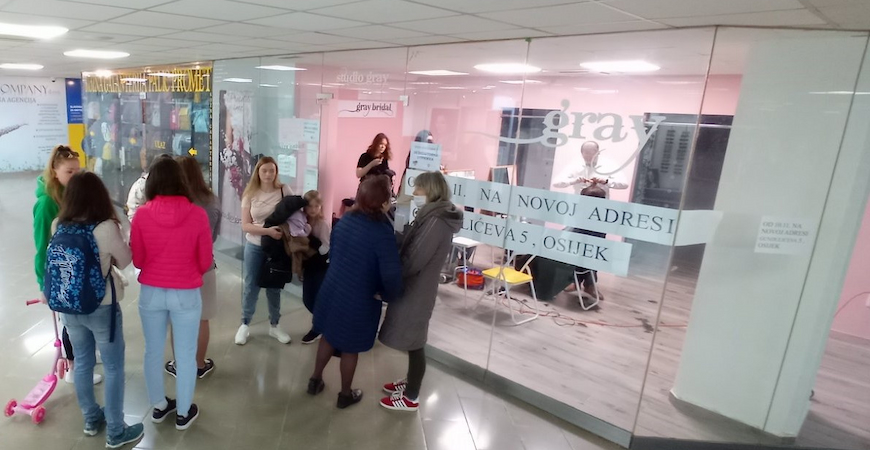