A discussion with Charlotte Wester, national delegate for Sweden on the board of Emmaus Europe.

Can you tell us about how Emmaus began in Sweden?

It all started when a few people from Sweden heard about Abbé Pierre’s work and travelled to France to work alongside him for a time. Following his example they formed the first Emmaus group in Lund, situated in the southern part of Sweden, in 1959.

But compared to other countries the first groups in Sweden focused more on giving hope to young adults by sending volunteers to India and South America.

Almost 50 years later, a joint initiative of some groups and individuals within the Emmaus movement, such as Birgitta Göranson Iliste (from Swallows India Bangladesh) and Christer Johansson (chair of Emmaus Sweden), decided to gather the Swedish groups that shared the same ideas under one umbrella. In 2008, Emmaus Sweden was created and was made up of 10 Swedish organisations, all working in the Emmaus spirit.

What activities are led by Emmaus in Sweden?

Emmaus in Sweden is one of the largest stakeholders in the entire movement for the collection of second-hand clothes and goods. In 2020, for example, we collected 6,000 tonnes of clothes. In total, around 180 stakeholders are involved in Emmaus Sweden.

The Swedish groups * used to co-organise an annual solidarity sale for the benefit of Emmaus International. It was an opportunity for us to raise awareness about our international struggles and to support solidarity amongst the Emmaus groups all across the globe. However, in recent years and especially since the pandemic, it has been difficult for us to co-organise any such events. Each of the groups have been arranging their own solidarity sales. The good thing is that we have been able to continue with these solidarity initiatives.

The groups in Sweden unite to defend values of the movement. For example, we have joined forces to shed light on the occupations in Western Sahara (by Morocco) and Palestine (by Israel). We have mainly led lobbying initiatives on this topic: writing articles/books and organising campaigns in our shops. We have also worked together on the issues of migration and fast fashion.

What are the challenges facing the groups in Sweden?

One challenge for the Swedish Emmaus groups is the impact of more competition not just from other non-profit organisations but also from private companies profiting from second hand. For some groups, the need to put much more effort into the collecting of clothes and goods, for example with visual merchandising and marketing, has been challenging sometimes. One important role of Emmaus in Sweden is to provide a platform to share as much knowledge as possible, to unite our forces and to be more efficient together.

Another challenge worth mentioning: how can we, as Emmaus groups in Sweden, strengthen our work on reuse? Today, overconsumption is threatening the future of our planet. As a movement, our ambition is to propose another model for consumption, based on reuse and repair, while supporting solidarity initiatives to help the most vulnerable. As stakeholders in the sustainability sector we need to contribute by sharing our knowledge and influencing debates, notably highlighting the advantages of slow fashion.

Speaking to Christer Johansson, chair of Emmaus Åkvarn, Emmaus Gryttby and Emmaus Sweden, his view is that, overall, the Swedish groups have managed this difficult situation well. All the groups suffered due to the pandemic and had their own way of coping. Many of the groups have focused on adapting their shops and how they are organised, in accordance with the restrictions. Emmaus Sweden has monitored the situation and reached out to the groups, offering them support.

According to Birgitta Göranson Iliste, board member of Swallows India Bangladesh, her group has been successful in adapting their very programme-based work. Employees have mainly worked from home, leading to an evolution of the ways of meeting. Travel as part of their internship programme has been put on hold and the exchanges were conducted online via virtual study visits and digital exercises. Most of their work has been able to continue in some forms.

An important part of this adaptation process has been the support provided by the Swedish government (and also, in some cases, other structures). Since the pandemic struck, it has been possible to postpone tax payments and to get furlough funds from the state, which has made a big difference. 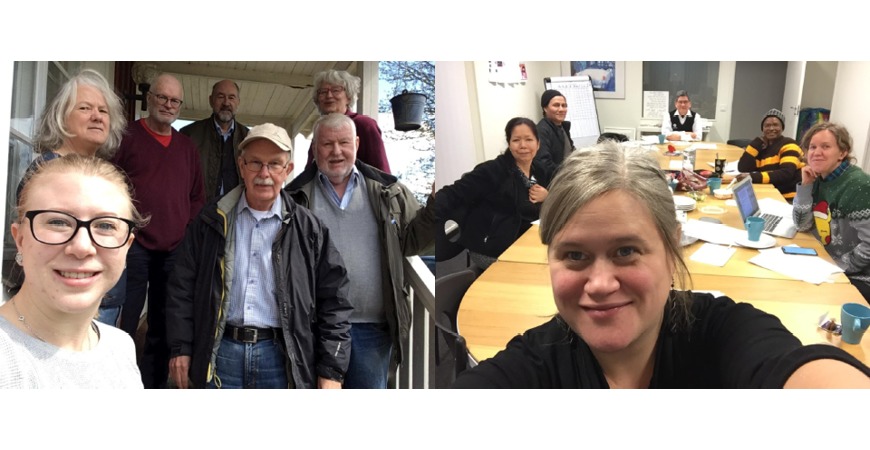