Extracts from an interview with Jérémie Udry, national delegate for Switzerland on the Regional Council of Emmaus Europe.

Can you tell us about how Emmaus began in Switzerland?

A conference was given by Abbé Pierre in Bern in February 1956. Marcel Farine and his wife Thérèse were touched by Abbé Pierre’s speech and thus decided, two days later, to launch an operation for donations of funds and merchandise in Bern. They then founded the ‘Emmaus Friends Committee’ in Bern.

The same thing happened in Zurich where the ‘Friends of Abbé Pierre’ association was created around the same time. Marcel Farine was the first Chair of the Emmaus Switzerland Federation and later on, in 1971, he also became Chair of Emmaus International.

In 1957 an Emmaus ragpicking community was created in Geneva. This was the first Emmaus community to be created outside of France. In the canton of Jura the first Emmaus initiatives were launched in 1959 but the Emmaus Jura group was only officially created in 1963 in Boncourt. In 1975 the Étagnières community was created near Lausanne. Next came the community in Sion in 1979, Ticino in 1983, Fribourg in 1985 and La Chaux-de-Fonds in 1987. In 2017 the Emmaus Friends Committee in Bern moved premises and became an Emmaus community.

What activities/initiatives are led by Emmaus in Switzerland today?

The role of the Emmaus Switzerland Federation is to coordinate and support the activities led by our member groups as well as to build relationships with partner associations, to lobby politicians, to be part of the debate on the causes of poverty, to create unity amongst our groups, to offer solidarity, to represent the movement and build a relationship with the local, regional and federal authorities as well, of course, as with Emmaus Europe and Emmaus International.

The communities have a duty to welcome any person who is in difficulty and to help them in their social and professional integration in the community. The main activities led by the groups include: collecting materials and repairing what we collect and when necessary we also offer a home collection service. The companions are essential to our Emmaus solidarity shops and feeling useful at work helps these people to recognise their own value.

What are the main challenges for the Swiss groups at the moment?

The main challenge is to strike the right balance between our social mission and the need to make profit to support our organisation (we have no other sources of income). We need to find this balance for the sake of the cohesion of our team.

In the groups we’ve had some recent changes in our management teams and committees. New ideas have since come to the fore and these varying points of view have helped us to challenge things we used to be certain about and to shake things up a little bit.

There has been one issue following the Covid-19 crisis: waste management. Major changes in the sector of waste management are currently underway. Paper and textile are no longer being bought, they are now taxed instead. It is becoming increasingly difficult to find solutions for excess textiles.

Despite the losses incurred due to 2 months of inactivity the groups are getting by just fine for now. During the post-lockdown period our groups received lots of donations and our second-hand shops had plenty of customers.

During the semi-lockdown period some of the communities received financial support from a Foundation. The number one concern for the communities now is the risk of being put in isolation by the authorities.

At the general assembly of the Swiss federation, due to the great recovery in our groups following the crisis, we decided to contribute all profits made on Friday 9 October in the Emmaus shops across Switzerland to the International Covid-19 Emergency Fund. There was a round of applause when this decision was taken! 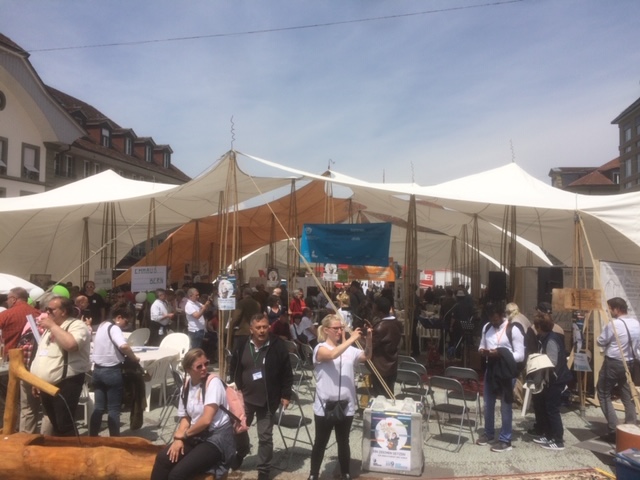