A discussion with Grigory Semenchuk, national delegate for Ukraine on the board of Emmaus Europe.

Can you tell us about how Emmaus began in Ukraine?

It began in 2002 when the founder of Emmaus Oselya, Olesya Sanotska, visited the Emmaus Lublin community in Poland. At the time she was volunteering in organisations which supported addicts and had met a lot of people who were homeless as well as suffering from addiction problems. She wanted to find ways to provide further support for these people. She was invited to travel to Poland to see how associations work there and after visiting Emmaus Lublin she and her colleague, Roman Prochko, decided to launch a community in Lviv based on the Emmaus model.

This initiative was supported by the leader of Emmaus Lublin, Zbigniew Drążkowski. He invited Olesya Sanotska to come and talk about her plan at an Emmaus International meeting that was to be held in Poland in 2003. She attended the meeting and the representatives of Emmaus decided to help her new “Oselya” organisation to purchase an old house not far from Lviv. A few weeks later the first companions were welcomed in the community. It took the organisation a bit of time to set up its economic activities and that is why Oselya only applied for trial membership status in 2008, becoming a member of the Emmaus movement in 2010.

What activities are led by Emmaus in Ukraine?

Emmaus Oselya leads the “classic” Emmaus activities of running a community of 30 companions, collecting used goods and operating our 2 sales areas. The companions also organise furniture-making workshops and provide paid services for the local people. Given that Oselya was the first organisation helping homeless people in Lviv (and one of the first in Ukraine), it has been providing all kinds of social services for the homeless ever since it was founded.

Since 2003 we have distributed hot meals in downtown of Lviv every Thursday for 100 homeless people. The meal is cooked in the community by our companions. Furthermore, we organise Christmas and Easter events for 400-500 homeless people every year. In 2008 we opened a social centre – a day centre where homeless people can take showers, do their laundry, get a haircut, find new clothing and enjoy a meal. This day centre is still the only place in Lviv providing this kind of services for the homeless people of the city.

We organise special events where we give out clothing and other goods for free to low-income families. Since it was founded Emmaus Oselya has been the voice of the homeless, lobbying to defend the interests of the poorest. The attitude towards homeless people was negative in the city, so a lot of effort was put into raising awareness amongst the local community about this problem. Without this improved level of awareness, we would not be able to collect second-hand goods, run our economic activities and provide the services we provide to the homeless. No-one would have supported us back then. To increase awareness, we organised a lot of public events like exhibitions, conferences, second-hand fashion shows and garage sales in order to have opportunities to talk about the problem of homelessness. For a couple of years, we published a street newspaper and in 2017 we published a book about Abbe Pierre and the Emmaus movement that was written by the famous Ukrainian writer Andrey Kurkov.

The winter of 2006 was bitter. Emmaus Oselya organised tents for the homeless during this period, providing shelter to 300 people. This led to the opening of the first night shelter in Lviv. Since the winter of 2006 we have been doing additional patrols in the streets every time the temperatures drop significantly in the winter. The companions take hot meals, tea and clothing with them as they look for homeless people in the evening in the city. In 2011 the Oselya group also opened a social hostel for former companions, 14 adults and 4 children are currently staying there. In 2013 Oselya was the first organisation to set up clothing containers in the city. This example was later followed by many other NGOs in various cities all across the country. We started off by installing 3 containers and we now have 30 scattered across the city.

In 2019, with the support of the European Emmaus groups, we started to construct a recycling center, a place to store and sort the goods we collect. The construction work was scheduled to be complete in May 2021.

The Nasha Khata community in Drohobych has recently applied for trial membership status. For a long time this community had a partnership with Oselya and Emmaus Europe. Nasha Khata specialises in collecting used objects – clothes, shoes, books and furniture – sorting, repairing and preparing furniture for its next use. The group also runs very successful farming activities. 34 people are currently living in the community and they benefit from the support of 15 people.

How have things been going since the health crisis and how did you adapt to the situation? What are the challenges facing the groups in your country (now and before the crisis) ?

Since it was founded in 2003 Emmaus Oselya has had to face different challenges. First of all the Ukrainian people did not trust in NGOs as they were something new in our country. Furthermore, there was no understanding of how we had to help homeless people. They were seen as lazy people who simply didn’t want to work, despite the fact that many people ended up homeless in the 90s after the collapse of the Soviet Union. NGOs in Ukraine were not allowed to run economic activities so we have had to come up with solutions to get around this. Our stores accept “voluntary contributions” for the second hand items we have on offer but we are not allowed to sell these items. We cannot sell goods donated from abroad either – this is why we do not accept transports of material from other European Emmaus groups as some communities do. Everything that we receive must be distributed for free and each load of material is checked over by the authorities.

Another thing that is common for NGOs in Ukraine is to not receive any backing from the state. We receive some support from the local authorities but this only accounts for around 3% of our annual budget. Despite this we have been able to organise economic activities that cover the operating expenses of the community and these funds also allow us to organise some solidarity initiatives. The pandemic made it difficult for us as our stores were closed for a few months in 2020 as well as in spring 2021. We thus decided to organise fundraising campaigns and did some additional work (cleaning streets in the city, helping local citizens with gardening, etc.). We received very significant support from Emmaus International during this difficult period.

During the pandemic and the lockdown we became the voice of homeless people who had been abandoned on the empty streets of the city. We became experts in working with the homeless and defending their rights during the pandemic. The people of Lviv united to support the homeless. Despite the financial difficulties we faced we were able to keep the community going and carried out solidarity initiatives during the pandemic (food distributions, hygiene services, providing information about Covid-19, etc.)

Now we urgently need a new vehicle as two of the lorries that we use are old and break down quite regularly. It is difficult to collect used goods from our containers and from people’s homes without a proper vehicle.

An armed conflict has been going on since 2014 with Russia in the Donbass region, can you please tell us more about the situation now, how has Covid affected the conflict?

Recently the number of Covid cases has been dropping. It looks like the 3rd wave of pandemic is ending and we recently came out of lockdown in our region.

A major threat is the massing of Russian troops on the border (there are over 120,000 Russian troops in the area). Russian media talk of the possibility of war with Ukraine on a daily basis. Pro-Russian separatist groups in the East are threatening to move to a more active form of confrontation. We also know that Russia has begun military training for reserve officers. All these circumstances clearly undermine all previous agreements and negotiations on the settlement of the situation in eastern Ukraine. We are grateful to our friends from all over the world who support Ukraine’s aspirations to restore our territorial integrity. It is extremely important for us to see other countries opposing an extension of the Russian invasion of Ukraine. 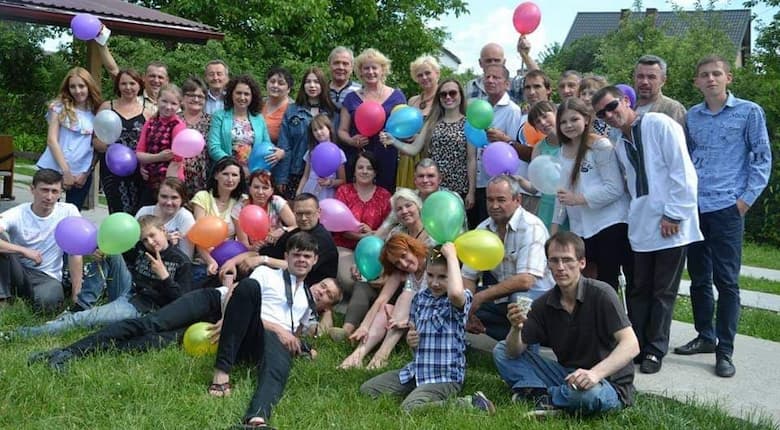