Zbigniew Drazkowski from Emmaus Lublin: Poland at a Historic Crossroads

The last regional board meeting was held in Poland. At the meeting we asked our host, Zbigniew Drazkowski, founder of the Emmaus Lublin group, to give us his point of view on the political situation in Poland under a far-right regime. Here is what he said, the article is quite long but it is a reflection on the history of Europe as a whole, not just Poland.

25 years after the fall of the communist system and after years of continuous economic development we are now at a crossroads. After years of rule of liberal/centrist parties, the nationalist party, which is a far-right party, came to power in 2015. This party won the elections using the slogan, ‘Poland is falling to pieces’! How did this happen? Poland, an example of amazing economic success. Poland, the leader of transformation in Eastern Europe. Poland, with its new, modern road network, with its new cities, new airports, new stadia, new houses and new opportunities. How could the Polish people think that the slogan of ‘Poland is falling to pieces’ truly described our country? It doesn’t make sense, well, not at first…

After the fall of the communist system, after the fall of the Berlin Wall, the first Polish government adopted a liberal political and economic programme. A few months earlier the opposition from the old regime had been discussing options for the development of the country, looking for a Third Way – in between communism and capitalism….But it was eventually the first Minister of Finance, Professor Leszek Balcerowicz, a liberal, who became the face of economic and social change in our country. I remember 1 January 1990 well and how it felt to wake up to a shocking new reality in Poland.

22 years ago I was involved in a meeting behind closed doors, without any media present, with Lech Wałęsa, Tadeusz Mazowiecki (the first Prime Minister), Leszek Balcerowicz and Harvard Professor Jeffrey Sachs, the government’s economic advisor who promoted radical economic changes for our country. At this meeting everyone reflected on the period of transformation. They talked about the mistakes they made, they tried to explain themselves, to justify themselves – only Balcerowicz said that he didn’t make any mistakes, that he wouldn’t change anything if he had to do it all over again.

What happened in the 90s and after to make the Polish people forget their own history?

I think a good example would be the liquidation of the State farms called the Kolkhoses following a single decision, a law which was voted on in 1992. In just one day, all of a sudden, over 300,000 people, including families with children, lost their jobs and their only source of income. This was done in the name of liberal laws, in order to free up economic potential, to create new opportunities, and so on and so forth.

But what opportunities could these people really have, people whose lives and whose families’ lives had been intrinsically linked to the Kolkhoses for 50 years? These families, generally based in isolated regions in the countryside, often lacked decent education, had no professions and no so-called “useful” skills? The only option remaining to them was to gather mushrooms and blueberries in the forests for 3-4 months per year…

After 25 years of transformation another liberal, Professor Marcin Król, summed up the situation in an article, which has since become famous, called ‘We Were Stupid’. The article is a bitter but honest account given by a great man.

The fall of the Civic Platform government – the liberal-centrist party and its Prime Minister, Donald Tusk – in 2015 and the victory of Jarosław Kaczyński and his nationalist Law and Justice (PiS) party came in the aftermath of decisions by the liberal government to make school compulsory for children aged 6 and above and to raise the retirement age. Both decisions were taken without any public debate.

They didn’t listen to the Polish people when a young couple, the Elbanowskis, collected 1 million signatures for their petition to organise a referendum on the decision for making school compulsory for children aged 6 (in the constitution the threshold for a referendum is set at 500,000 signatures). I remember what I thought when the media announced that the government had just thrown 1 million signatures in the bin, I thought to myself, “they’ll be made to pay for this sooner or later!”

In October 2015 parliamentary elections were held and PiS won, although they did not get the support of the majority of the Polish people.

Poland has had economic success but it is the poorest that have paid the price! Maybe the slogan ‘Poland is falling to pieces’ makes more sense if you apply it to social matters here in Poland…

When the PiS won the parliamentary elections, a few months after the victory of a conservative, Andrzej Duda, in the presidential elections in May 2015, Kaczyński decided that he had the right to change everything he wanted to change, that his party was like a sovereign in our country, that he didn’t have to respect the opposition or the Polish Constitution. In truth, they implemented Putin’s concept of ‘sovereign democracy’. It seems to be an effective way of implementing an authoritarian system…

He named the public prosecutor as Justice Minister.

He also waged war against the other chambers: the Supreme Court and the Registration Court. He created new structures such as the Disciplinary Court – a structure aimed at limiting the influence of independent arbitration judges.

The overwhelming majority of judges have fought tooth and nail to protect the independence of our judicial system. Unfortunately the Constitutional Court now depends entirely on the PiS and it repeatedly and unashamedly violates our Constitution.

For such changes to be possible without major protests, you need to have control over the media. All public media outlets, both national and regional, are in the hands of the PiS. All public television and radio programmes, including regional media and the regional press, are in the hands of the PiS. How was this possible? They simply placed revolutionaries and ordinary but cynical career-driven people on the Media Council and on the boards of various media companies. They also nominated the new Chair of the biggest Polish oil company, Orlen. This company bought 600 regional press companies a few months ago. Major purges, targeting certain individuals, have also been carried out. Public television, which is mainly watched by people who have a lower level of education, who are from rural areas and from small provincial towns, present an alternative reality to the one we are living…Even today, during the war in Ukraine, the government-controlled media and the PiS’ politicians continue to see the EU as the main enemy, not Russia!

Their lies have no limits, lies are omnipresent. Deception has become an instrument and the method of choice for the PiS’ politicians and for journalists who are linked to the ruling party.

Donald Tusk, the former PM with the Liberal Democrat party and former President of the European Council, is depicted in public media outlets as a traitor to Poland and a servant of Brussels or Berlin. Only those who vote for the PiS are considered to be ‘real Poles’ – all others are “second-rate, second-class Poles”, as Kaczynski himself put it in public.

Massive changes are being made ‘to further the grandeur and splendour of our country’, ‘to protect our sovereignty, our independence’, ‘to defend our religion, our traditional values and the traditional roles of men and women’, etc. Minorities are targeted, in particular LGBT groups as well as refugees from Africa, from the East and from Asia – only Ukrainians are welcome at the moment.

The Catholic Church in Poland and the clergy have been key supporters of the PiS.

Because a “real” Pole is a Catholic! This double identity has been present as an idea in our country since the 18th century. Over the last year, however, certain bishops have started to distance themselves from political life, becoming less involved, but this withdrawal has been gradual and rather timid. Mixing the Church with politics has created wide social divides because political commitment and religion are two major dividing forces in our civilisation.

The start of this revolution in Poland was shocking and the situation remains shocking today. But it quickly became clear that this was not a solely Polish phenomenon. The Americans chose Trump, the English voted for Brexit. In France there is Marine Le Pen, in the Netherlands they have the Freedom Party and Geert Wilders, the Italians had Matteo Salvini and now Giorgia Meloni. Viktor Orban was elected in Hungary even before the PiS came to power in Poland…

What are the underlying reasons for such situations in our societies?

One key common factor behind this situation is FEAR, created by the speed of social changes (the fall of the Berlin Wall, the fall of communism in Russia), of economic changes (the globalisation of our economy), of technological changes (the Internet) and of cultural changes (migration, women’s liberation movements, recognising the rights of minorities, new debates on gender matters, etc.).

The majority of the population, who are poor and who have little education, have not benefited from these changes, they have, in fact, suffered from them either economically or because they have been unable to understand these changes. They thus turn to simple solutions and a strong central power, a power capable of fighting against all problems and of looking after the poor who are trying to find their way.

The second main cause of our current issues is linked to the ideologies of liberalism and of capitalism which have benefitted from the void following the collapse of the world of two opposite ideologies and which used this situation to further its interests. It was a scam – the workers at the Kolkhoses were tricked, our societies were tricked and poor countries were tricked. Never before has wealth been so unfairly divided so quickly.

I don’t have time to discuss all of the factors behind our current situation today but – and this won’t come as a surprise – it is a situation that we are responsible for, that we created. In Poland we say that we have “put a hand into the chamber pot”. 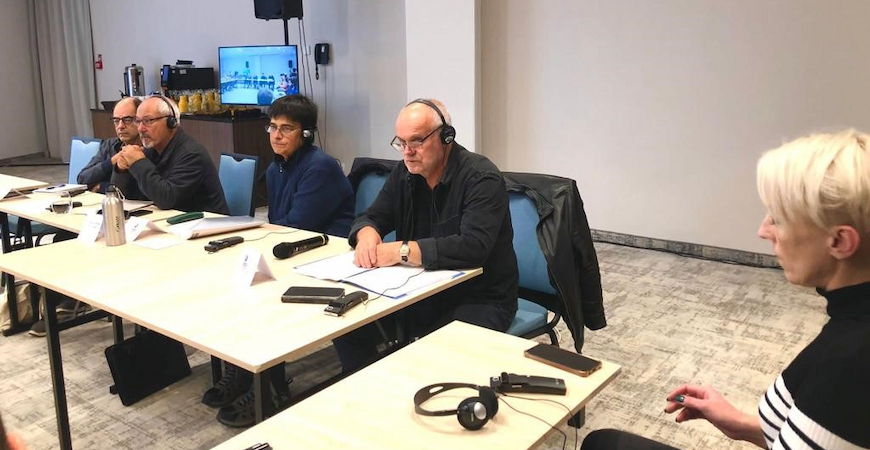