Emmaus Alternatives set up the first system of solidarity lockers for the homeless in all of France. The group worked alongside the authorities in Montreuil (near Paris) and Portuguese association ACA (which started off this scheme in Portugal) to install 12 lockers in October 2018 before adding another 12 in November 2020.

Set up in a public area these designer lockers are available to the homeless 24/7 as long as they have their key. This scheme meets a key need for these people: to have a safe space to store their belongings. The agreement which each member of the scheme includes a weekly meeting to provide social support with a view to getting them reintegrated in society.

This project doesn’t keep people on the streets, it helps to get them off the streets and to reintegrate them in society. The solidarity lockers help meet a fundamental need but the social support and the social bond that is created thanks to the scheme start these homeless people off on a journey which, little by little, will lead them away from the streets.

The solidarity locker scheme was first launched in 2015 in Lisbon following conversations between volunteers from ACA and homeless people in the city. They outlined that it was a daily struggle to prevent their money, documents, clothes and objects which have a sentimental value from being stolen. They needed a safe place to store their belongings.

After spending a long time working on the design with a local company the first solidarity lockers were set up in Lisbon in 2015. In 2018 60 lockers were made available to homeless people as long as they signed an agreement to meet with a social worker once a week. The results of this initiative have been impressive: over two thirds of the people to have left the scheme did so because they found a job or housing or because they joined a rehab centre or a reintegration community.

This simple, fast-acting initiative has been added to the other initiatives led by Emmaus Alternatives since 1991, helping the homeless and those isolated from the job market to access their rights and to find employment. Emmaus Alternatives also strives to make public spaces more welcoming to those who are suffering from exclusion.

To find out more have a look at their website: www.emmaus-alternatives.fr 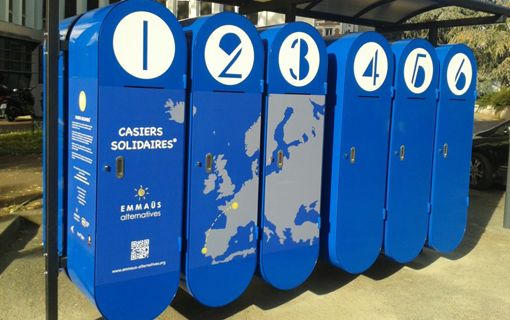