Based on an interview with Marie Balseca, the Italy national delegate on the Regional Council of Emmaus Europe, and Franco Monnicchi, the President of Emmaus Italy.

Can you tell us about the early days of Emmaus in Italy?

In the late 1960s, a handful of young Catholics who no longer agreed with traditional charity decided to live in a different way with poor people who were making a living from recycling. In December 1962, one of them, Vincenzo Benciolini, returned from France, where he had spent several months in various Emmaus communities, and set up the Verona “community of ragpickers”.

How did Emmaus develop in Italy?

A few years later, in 1967, Emmaus international work camps were held in Northern Italy. These work camps were a fantastic opportunity to interact, meet people from other cultures, and open up to others, while undertaking a useful activity together. The success of this initiative contributed to the development of Emmaus in Italy. There are now 27 Emmaus charity shops in the country, as some communities have several shops each. In general terms, including paid employees, Emmaus Italy amounts to over 550 people involved in the movement. And we are continuing with the youth camps: one of their notable recent achievements was setting up a new group in Palermo!

What are Emmaus’ main income-generating activities in Italy?

The groups primarily do the traditional Emmaus work of collecting, reusing and selling unwanted goods. It is difficult to calculate the number of tonnes of goods collected per year. And the percentage reused and recycled varies greatly from one community to the next. The figure can range from 30-60% of goods recycled and put on sale.

You are heavily involved in defending human rights. Can you give us some examples of initiatives that you undertake in this area?

During the school year and the summer camps, one of Emmaus Italy’s activities is training and awareness-raising about social issues, such as: migration, the mafia, and human trafficking. Emmaus Italy also supports the Mediterranea maritime search and rescue operation. The initiative primarily aims to show solidarity with migrants in the Mediterranean and denounce European governments’ migration policies. In October 2018 Mediterranea launched the Mare Jonio, an Italian-registered rescue and monitoring ship. Thanks to the support of other European groups and the backing of EE and EI, Emmaus Italy has helped fund the ship and is now a member of the initiative. The campaign is continuing to this day! Website link

What are the issues currently facing Emmaus in Italy?

At the present time, the national organisation is facing amendments to the third sector reform (the Riforma del Terzo Settore). These institutional changes are forcing us to rethink and change the way we work.

The current crisis has not affected our commitment to the most vulnerable communities. We have managed to face up to this situation thanks to internal solidarity and an appeal for donations made to the general public and foundations. We have also stayed standing shoulder to shoulder with organisations that fight for human rights. Our partnership with Mediterranea always makes us think about Global North-South relations, weapons sales, refugee law, and freedom of movement.

Furthermore, this crisis has raised the issue of the fragile health system and, at the same time, the importance of promoting social justice and championing the common good. 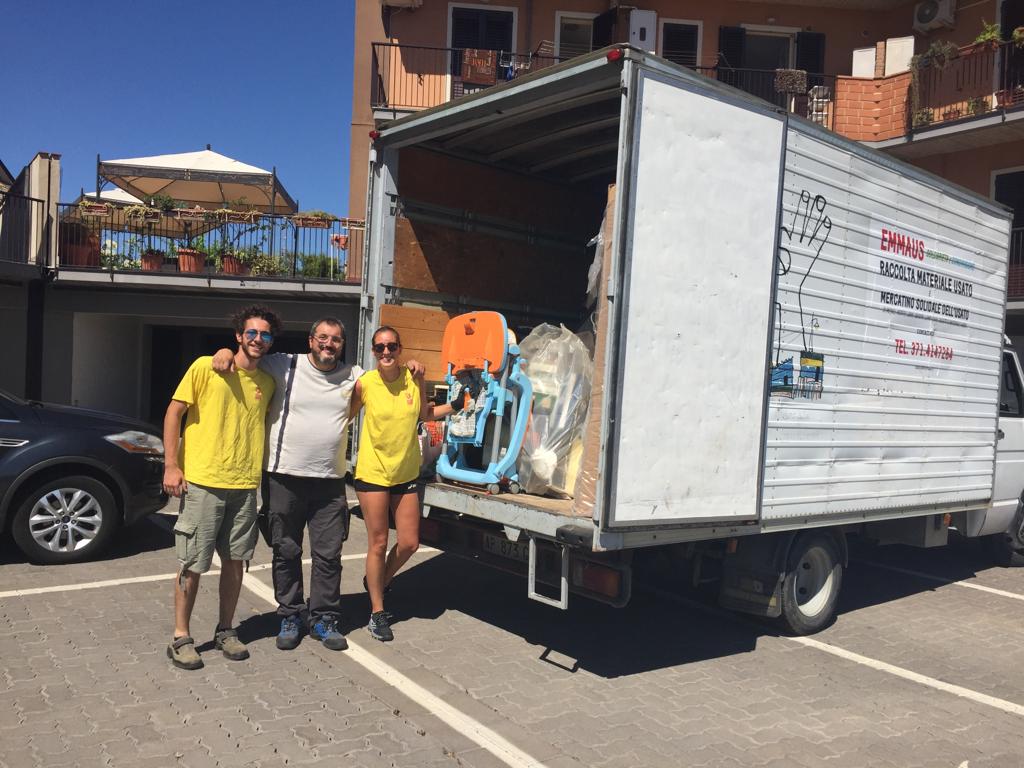